I am not one for mobile games. Mostly due to the fact I really don’t have a “smart” phone. I usually enjoy sitting in front of a computer for hours on end for my gaming experience. But while I eat or sit on the toilet is fair game for game developers. Currently that time has been occupied by a game called “Game Dev Story.” Available on iOS and android.

In Game Dev Story you take control of a small indie studio in hopes to one day make it big in the industry. You are the head of the company deciding what type of games you should make, level up your employees so that they can make better games, and give your employees drugs to keep them awake! You know normal boss behavior…

Game Dev Story was released in Japan in 1997 on PC, and was developed by Kairosoft. They made such other games as The Sushi Spinnery and World Cruise Story. Game Dev Story was ported over in 2010 for both iOS and Android devices. The game was a smash hitting the top 10 list on the iOS store.

The game is a simulation based game where you take control of a small studio. You must manage funds, employees, and creating the best game you possibly can. You travel through the years creating games for consoles that come out such as the Game Kid, PlayStatus, and the Intrendo DM. The player chooses can choose the genre of game and what the game will be based off of. 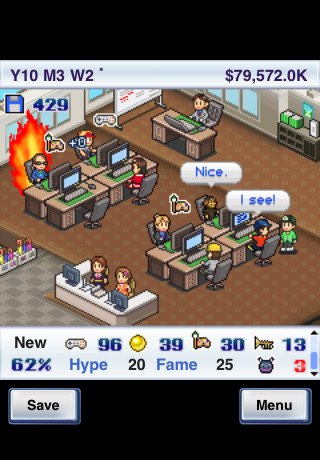 I can’t speak for how factual this game is to running an actual game dev studio. But Game Dev Story is very addicting none the less. It’s one of those games where you can just kick back and mindlessly lose hours of your life, until your butt gets sore from sitting on the toilet too long. The game’s graphics have a certain charm to them I find add to the whole feel of the game. As the sounds and music, they get annoying fast. Especially the constant tune that plays every time you hit a development cycle. Personally I just turned off the tunes and cracked up some of my own music. I found the game genuinely difficult at times. The game itself has a nice curve in difficulty.

Game Dev Story is a great game besides the soundtrack and sound effects. But that’s easily fixed with the mute button. One thing I want to bring to your attention is the end game leaves something to be desired you can continue the game but it just ends after the last console comes out. Leaving much to be desired, like the PC counterpart Game Dev Tycoon you can create your own console.