Legend of Dungeon is a randomly generated dungeon crawler. In which you have one life to get as far as you can, or hopefully reach the coveted treasure on the 26th floor. The art style reminds me a little bit of Fez, but with an incredible lighting engine. The lighting in is incredible giving the dungeons an eerie vibe and the sense of going deeper and deeper into the dungeons. The soundtrack added to the suspense adding a sense of foreboding as if they are telling you “You will die here.” Which is more than true while playing through I was only ever able to get to level 7.

While I wasn’t busy dying I was trying to prevent so with the games real time battle system. Fighting was lacking in the feedback and power. My little stick arms flailed with a sword back and forth hoping that I would hit the snake that was dealing me hefty damage. The feedback that we were doing damage were flashing particles, and a beeping sound when you dealt out a hit. Just a beep, no clang or swoosh, just a beep. This made me after awhile felt like killing enemies was a chore. Also attacking was extremely difficult due to the angle of the camera. It gave me no depth perception of where the enemy was in relation to me, making me look like an idiot swinging wildly the air.

Speaking of depth perception there were certain “puzzles” I guess you could say where I was required to jump from point A to point B. Since the game has an odd angle I would vainly hope as I jumped that I would land on the platform and not into the lava below. Let’s just say more often than not I would start over in the bar.

The game offers a gigantic selection of droppable items. Which is the games only source of progression. This is probably the games strongest quality, since each run you have new tools at your disposal. Sometimes you get the luck of the draw and get amazing items, or the short end of the and die on the first floor *cough*. With the items you start digging into the games humor, for instance at one point I found a Pharaoh’s headdress and was beating down zombies with a sickle. 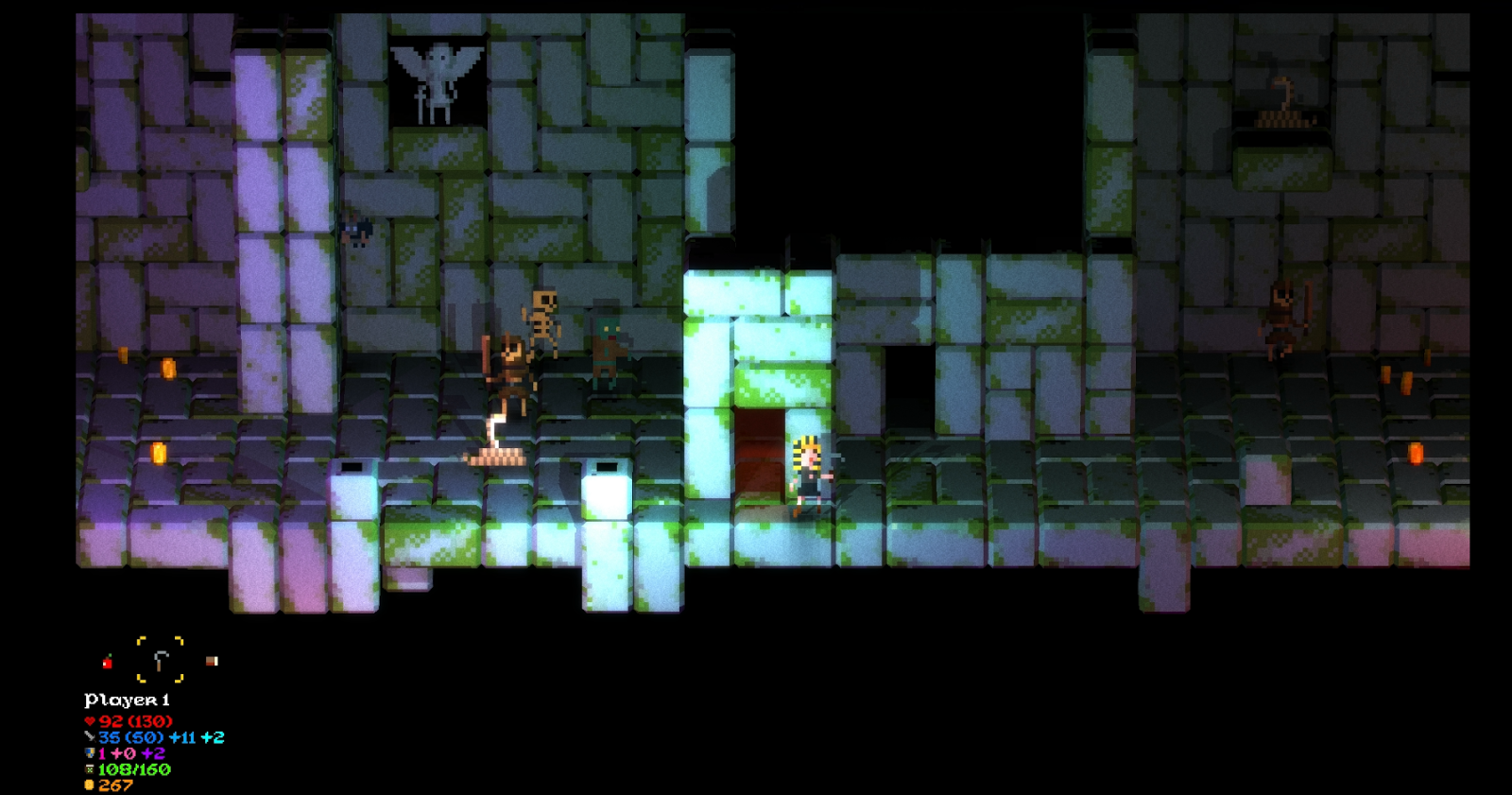 As previously stated the games only “progression” I saw was picking up items from fallen enemies. I saw no use for the copious amounts of gold I picked up. Don’t get me wrong you do level up in a flash of rainbow fireworks, which gives you more HP from what I saw. But there was no sense I was getting more powerful. I so desperately wanted to see a menu where you could level up skills, but no such luck. I just wanted to feel like I was indeed doing something worthwhile.

Legend of Dungeon is in that inbetween phase of of good and meh. It’s decent in the sense of the dungeon crawling/roguelike genre. You’ll be doing a lot of crawling, all over your floor cursing that snake. But it’s the little things that draw away from the experience. For me I wanted power in my hits, I want to feel the hit and experience it. Not to mention the camera angle set me back a few lives and I still haven’t got used to it. Also the lack of feeling like I was progressing put me off. If you can indeed get past the issues, then Legend of Dungeon is indeed the game for you.

You can buy Legend of Dungeon here: http://store.steampowered.com/app/238280/