Please note that this Early Assessment is only current as of Nov. 4, 2013

Warning to the Reader: This is an early assessment of Rimworld. This game will destroy your time. If you have loved ones, class, and/or a social life. Please take necessary precautions before you delve into Rimworld. Tell your loved ones goodbye for the next six months, drop out of class, and tell your friends you’re going to go hermit, they’ll understand.

Rimworld was recently Kickstarted and received over $250,000, the original goal was only $20,000. Needless to say a lot of people are excited about the game. I also being one of those people. Having just downloaded the game today I started playing and before I knew it my ninth settlement was destroyed in a firefight with raiders. At this point I realized I hadn’t eaten lunch and went to get some food only to realize eight hours had passed. I had missed lunch and dinner. The last game that made me skip meals without noticing was Minecraft, and we all know how popular that was. The game is based around the expansion of humanity across the universe. You’ve been assigned to create and maintain a settlement on the rim of the universe hence the name Rimworld. But with the expansion of humanity means that space is the wild west. Anything goes so you’ll find yourself being attacked and raid by pirates seeking people or resources. But if you succeed fighting off the enemies you can capture some of them and persuade them into joining the settlement. Having it be easier to build things. But at the risk of being invaded by twice as many bloodthirsty pirates.

Rimworld is one of those games where you whisper under your breath. “I only need…” and the chain continues. I only need this to get this so I can do this! There is so much you need to do in order to create a working settlement. Each world is randomly generated so each time you have a new story you’ll create.The game draws you nicely starting you off with just enough resources to create a basic camp. Speaking of camp, You can design your base how ever you want. The first few times I played I burrowed into the mountains only to find out that ceilings can collapse. Remember kids support structures like walls can save your life. I then tried to wall myself off in a canyon only to find myself cornered by pirates who had blown up my turrets. My last base was struck by lightning, by the way lightning HUGE problem you need to deal with ASAP. My base caught on fire and spread quickly, when I sent my settlers to deal with the fire one of them caught on fire and began running around like a lunatic. I eventually figured out I could put him out with one of the other settlers. But no one told me if I tried to put the fire out on that guy would the not on fire guy have a chance of catching on fire. Soon my whole base was a flame and my settlers burned to death. Guess stop drop and roll isn’t a thing. 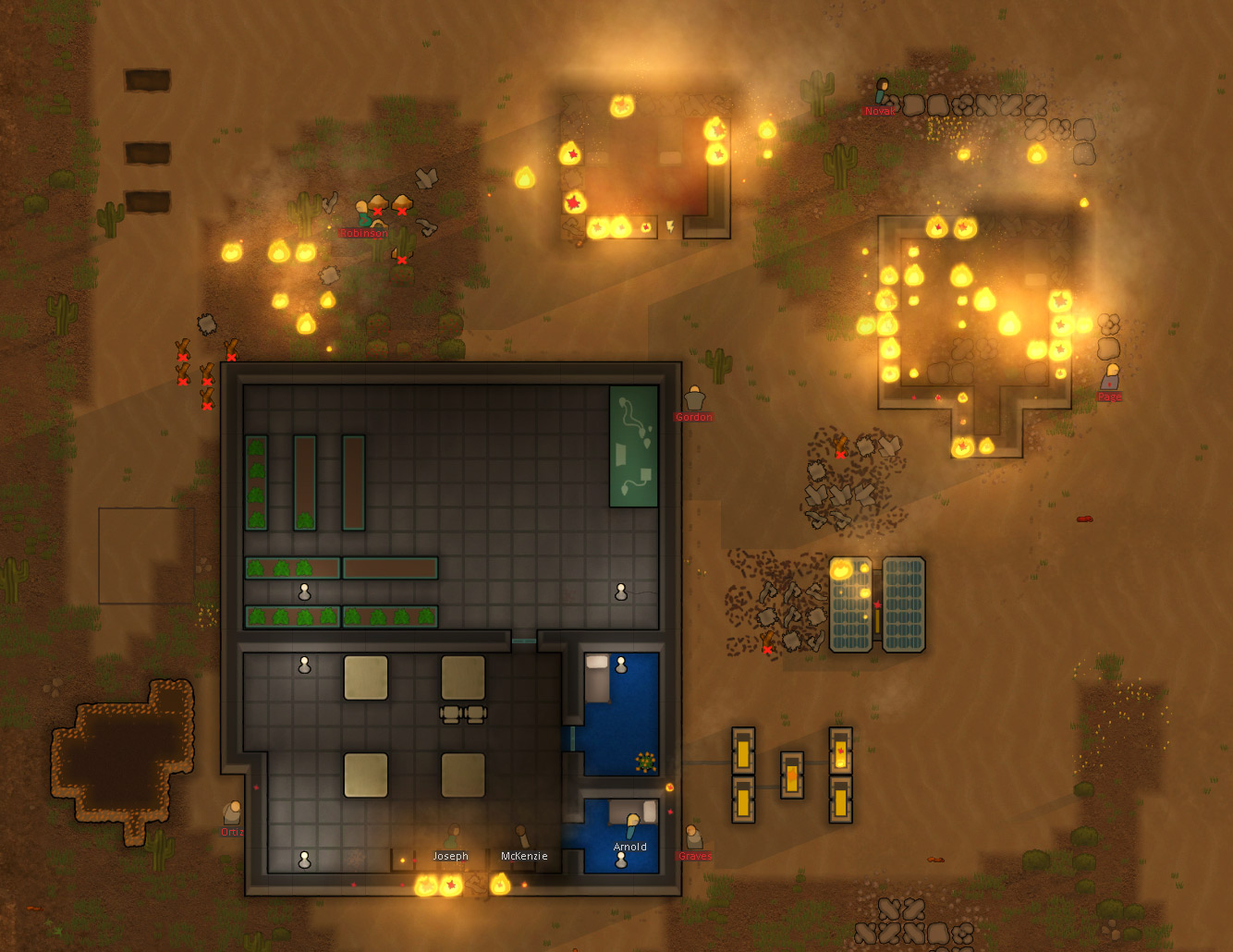 I don’t want to spoil anymore then that. Truly though the reason this is a short assessment is because I want to go back and play more. This game is going to be amazing. I would say next minecraft but this is a little bit more niche. If you have enjoyed dwarf fortress, prison architect, and FTL(Faster Than Light) you are going to have a blast. If I could rate an early assessment, I would rate this game 10/10 qubes and my double fist of approval. You really need to look into buying this game.